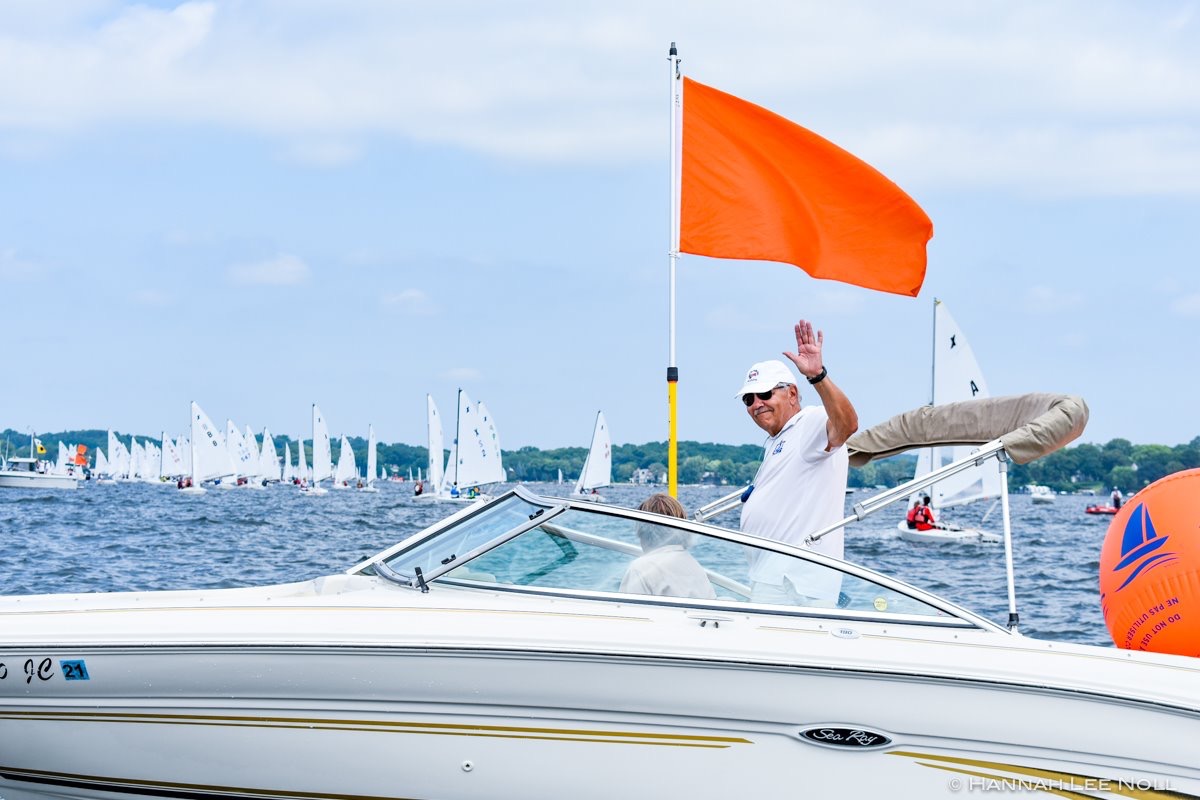 Ah, that laugh! That smile emanating from that broad face! There was a deep, staccato “he – he – he” at the end of a funny story or a witty remark. Larry Krause was full of them. He took great joy in working for sailors in his many roles on race committee. PRO, Gate or Markset (and he was known to be signal at least once) - in any role, he expressed that joy – whether with a funny sound, a set of expletive words that were unique or sheer pride in a job well done.

A gate was not properly set unless it was fewer than three degrees from perfect. Three was near failure. A starting line had to be perfect – postpone if it wasn’t the best he could do for the sailors watching what was coming. His instincts were amazing to watch; his skill unsurpassed. He worked hard at his craft to make each mark rounding, each leg, each gate the best he could. He expected nothing less from himself, nor nothing less for the sailors.

Larry was a patient teacher – anchoring, dropping marks, lining up the course and always with the anticipation of a change. He was two steps ahead at all times; made contingency plans for what might come to the sailors’ bow. He dutifully watched the sails at all times for the slightest of change. Did he need to react or could he exhibit patience and allow the wind to moderate itself? He was simply a student of the race course – every race, every gust - ever watchful and patient.

I will forever be Mrs. Porter as I hear him in my head. I will hear “sacre bleu” when a big wind shift comes at the start. When I listen to a markset boat tell me what I should do, I will recall his respect upon receiving advice and then have the courage to stay the course as I see it.  When an occasional stronger word comes to mind, I will hear myself count knowing Marilyn only gave him a pass on a few uses of a foul word – and he held to it. I will remember the “dance” of the boat as he paced back and forth allowing me about two feet of space to time or lift flags. The movement calmed him down. When 1:30 before the start rolls around, I will miss sliding that tape recorder into his pocket so all is recorded. I will miss proudly standing at his right (never left) shoulder recording every call and then his nod to me repeating his decisions on OCS. And I remember the silence on the boat as he thought through each decision with only an occasional “what do you think, Mrs. Porter?” He valued input and made us work as a team.

Mostly I will miss the man who was one of my most trusted friends. He taught me much; he depended on me much and that was an honor. He was a straight shooter – honest, fair and dedicated. This was a man the ILYA will miss immensely and me even more. “Sacre bleu”, Mr. Krause. Not sure we can do this without you. Thank you for your many, many years of loving this sport, these sailors and your extended race committee team.